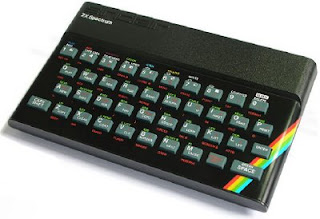 Sinclair ZX Spectrum
The ZX Spectrum was such as fine machine that it deserves a home of it's own. Here we will cover as many classic games that were released for the machine as is humanly possible. With an estimated 10,000 titles to choose from, there will be plenty to keep us up nights!

There were many top quality games for the Sinclair Spectrum and it's influence in modern home computing and gaming cannot be underestimated. So please join us as we delve deeply into the retro gaming treasure trove of those halcyon days, and re-live the era when playable games could be crammed into a paltry 48K of memory.

Find the Speccy at ZX Spectrum

Thanks for making me feeling like a teenager when I have seen this picture. Good lucky friends!

Hey, Barcelonazero that is our aim - we feel like teenagers too!