ZX Spectrum Night Gunner
Night Gunner was an earlier arcade game for the Speccy that pushed to quality of shoot em ups to new levels when it came out.

This game was released in 1983 by Digital Integration (Who also made other quality games such as Fighter Pilot and Tomahawk).

DI as they were also known, seemed to enjoy developing and releasing aircraft based games, and Night Gunner was (I think!) released shortly after Fighter Pilot - which had been more of an aircraft simulation game.

This time they went for the classic arcade action approach, and very good it was too. 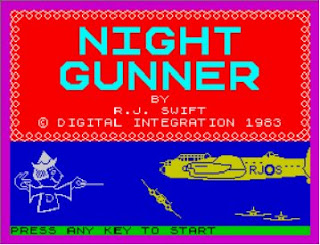 Based around the famous British Lancaster Bomber, this game is not an accurate simulation (and does not claim to be), and is really a 3D arcade shooter - plain and simple.

So, taking the role of tail gunner and bombadier, the aim of the game is to defend your Lancaster against ariel attacks from enemy fighters and to drop bombs on enemy targets.

This really was exciting stuff way back in 1983, and anything that had '3D' graphics in it was quite a revelation.

There were 30 missions in total, and each mission is broken down into three stages:
Your plane recieves damage through machine gun fire from enemy fighters and from flak on a bombing run. Once certain sections of the plane were damaged a report would flash up at the bottom of the screen, such as engine damaged, wing damaged and so on.

Your gun turret can be damaged leading to sluggish movement or even destroyed leaving your gunsight fixed in position. It still allows you to fire your guns, but the helplessness that washes over you as you watch the enemy fighters decorate your plane with lead can put a slight crimp on your day.

If a wing, the tail or flight deck was destroyed then it's curtains as your Lancaster plummets to the ground and you go down in a blaze of glory.

As you progress through the missions they do become progressively harder, with more fighters to deal with and longer flight times to get through. A keen eye and a dedicated trigger finger are definately required!

On Release:
At the time of release the graphics were very good. The 3D 'effect' was very effective and put you right in the heat of battle. The arcade action was intense, and the game was highly addictive. Each bombing run put you against different targets, so the incentive to see what you had to destroy next was always there. The 'deflection shooting' in the game (holding fire to release a continuous stream of bullets and moving the gun sight and seeing the tracer 'delay') was both realistic and jaw-dropping.

The test of time:
Well we here in the land of ZX Spectrum Games reckon that this game has stood the test of time pretty well. It still has a certain amount of playability and the missions become challenging the further into the game you go. Once you reach mission 20 you need to be a bit more conservative with your tail gun ammunition too, or you'll be left high and dry with nothing to shoot with. By todays standards it is a simple shooter, but games like this really paved the way for air combat simulations in the home gaming market. The way each mission and number is displayed (the Lancaster bomber flying across the screen and dropping bombs which reveal which mission number is next) has a certain amount of retro charm.

So - don your flying jacket and scarf, pull up into the night sky and blast away. Tally Ho, chocks away and all that.

This game for the ZX Spectrum is definately worth another look after all these years.

We recommend getting hold of the real Sinclair hardware - but if not then download a ZX Spectrum emulator and download this game for the ZX Spectrum. Alternatively you could try and play it online.

Vid capture of flying ace Major Lawrence Bartle Frere showing us pretenders how it is done in classic arcade action: