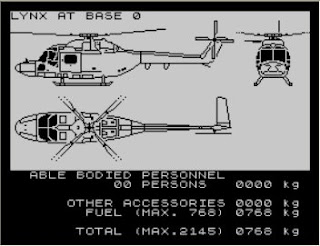 Released in November of 1984 by Durell Software, who were already famous for games such as the simple but effective Harrier Attack, and the superb Scuba Dive. In fact, Combat Lynx was not just a helicopter sim, it was also a battle simulation, with you taking control of a Westland Lynx helicopter.

The devloper Mike Richardson really went to town here with attention to detail and accuracy. This game (and previous releases) established Durell (and Mike Richardson) as a formidable developer of all types of games for 8-bit machines.

Combat Lynx had picked up a bit of publicity prior to it's release as it certainly represented something new and different for ZX Spectrum gamers. The publicity was justified as it was awarded the badge of honour (a crash smash) in the hallowed pages of the popular Spectrum magazine, Crash.

On first loading you knew that you were in for something special, as the loading screen (a lynx helicopter hovering above a road) 'came alive'. The rotor blades started spinning and the helicopter launched a couple of rockets towards a nearby tank, destroying it. These sort of touches were pure quality.

Picking your skill level (there were four to choose from), would determine the amount of bases you had in total. Base 'zero' always had an endless supply of fuel and amunition, and could also instantly heal any injured ground personnel.

You would begin the game at Base 0, and would choose how to arm your trusty chopper. Weapons included strafing rockets, cannon and machine gun pods, all of which fired in the direction the helicopter was facing. There were also the excellently named HOT weapons, which were wire guided anti-tank weapons, heat seeking anti-aircraft missiles (which could be fired without the need for aiming), and finally mines which could be deposited around your base perimeters to form a nice ground defence.

You could also carry inured and uninjured troops - it was a case of balancing your weapons and fuel against the maximum load you could carry. Already the attention to detail and accuracy was apparent within the game; it would require strategy and planning as well as good reflexes.

It was now time to take off, and remember even Jan Michael Vincent would have been overawed by the playing screen at first.

The main area of the screen was the 'view' - where your combat lynx would be shown in the surrounding landscape. The bottom area displayed navigation, weapons details and any immediate threats. To the left you would see your choppers height and any message alerts.

Flying would take a while to get the hang of as you would need to rotate your lynx then move in that direction. Turning through a ninety degree angle would make the screen 'flick' and you would now be viewing the landscape from that new angle.

It was disconcerting at first, but once you got the hang of it then you could really get stuck into the game proper. Nice contour lines over the hills added to the sense of movement once you began flying. All in all you could describe it as having a sort of 'remote cockpit view'.

Anyway, now that you were armed and off, you could decide what you wanted to do. There were no hard and fast missions, and it was up to you decide what to do first. Do you want to lay mines around your base as a first line of defence? Do you want to get to another base and drop off some supplies there? The open ended nature of the game really set it apart as something special.

The balance between strategy and arcade action was excellent. Before long enemy ground forces would be taking pot shots at you and enemy jets and helicopters would fly by and some of them would attempt to blow you out of the sky.

Instant fun could be had trying to shoot down enemy aircraft or destroying enemy tanks. Different weapons were also more effective against certain targets - but the more you played the better your aim would get. Due to this the game got you into the action quickly, but once you got stuck into the game properly then the depth of it really became apparent.

You could play for hours (if you were any good!) transporting troops and supplies to your bases around the map, creating minefields and watching in satisfaction as enemy vehicles drove into them and met their doom. This type of gameplay gave the game a lot of longevity.

On Release:
This game was well received when it hit the high street. It was unique when it was released as there was nothing else close to it in terms of detail regarding helicopters and weapons. The 3D effect was convincing, and when you got your chopper up to full speed the hillsides, houses and enemy units whizzed by giving a nice sense of speed and perspective. The fact that you had to watch your engine revs, height, fuel etc appealed to those who craved some realism within their games.

The test of time:
Well we here in the land of Spectrum Games reckon that Combat Lynx has stood the test of time pretty well. It still has a degree of playability and the different enemy units and weapons you can choose provide a good challenge and varied gameplay. By todays standards it is a simple arcade/strategy game, but Combat Lynx really paved the way for further real time strategy titles. Little touches like the cross section views of your helicopter enforced the realism that had been put into the game. Raise a toast Durell and Mike Richardson folks!

So - grab your joystick, ,get some leather flying gloves and GET TO DA CHOPPAH. You'll soon be experiencing 'The Lynx effect'.

This classic arcade/strategy game for the ZX Spectrum is definately worth another look after all these years.

We recommend getting hold of the real hardware - but if not then download an emulator and download Combat Lynx for the ZX Spectrum. Alternatively you could try and play it online.

Flying ace major Lawrence Bartle Frere shows us he is all about planes in this fine classic game in Spectrum Games - Combat Lynx:
Posted by The Retro Brothers at 7:39 pm