ZX Spectrum Beach Head
We have another classic game from US Gold in Raid Over Moscow - so let us discuss another good ZX Spectrum game from the same company, Beach Head

This title was well received when it was released due to it's varied gameplay, 3D graphics and constant arcade action. This game really put US Gold on the map as a good developer of games in the 8-Bit arena, and for the ZX Spectrum. 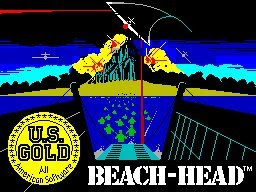 The aim of the game is to defeat an enemy fleet in airborne, seaborne and landborne battles. After selecting your difficulty level and control choice, you would input your name and now be the 'commander' of the fleet. A map would appear showing two main areas of engagement.

You could choose to meet the fleet head on or you could choose to negotiate through a narrow canal which contained many mines as obstacles. Negotiating this canal succesfully would make the enemy fleet forces lighter when you would later engage them. The game could really be broken into five stages which were:

Canal Minefield Run:
You would have to take ten boats and sail them through a canal area, avoiding mines and torpedoes and ensure that each boat made it succesfully to the exit area of the water. This stage was optional, but if you completed it then the forces you would meet in the next stage would be lighter.

Defending your fleet against airborne bombardment:
You would be now be controlling an anti-aircraft gun which could be moved from side to side and the elevation could be increased or decreased. You would see the enemy fleet in the distance, with their aircraft carrier being the most prominent ship. Planes would launch from the carrier and would approach you, starting as small specks in the distance and becoming larger as they would swoop overhead and drop bombs on your ship.

The 3D effect for this was (at the time) quite something. It would be up to you to shoot down these planes (10 if you had moved your fleet through the canal, 30 if you had engaged the enemy fleet head on if my memory serves me correctly). The anti-aircraft guns under your control had a nice recoil action as you unleashed your ammo at the enemy planes.

Hitting a plane would cause it to explode instantly - and shooting it out of the sky before it had dropped it's payload of bombs was the way to do it. If too many bombs hit then your fleet would lose a ship. If you were a really poor shot then all of your ships would be sunk and it was game over man, game over.

Defending your fleet against enemy ships:
Once all of the enemy fighter bombers had been disposed of then the enemy would resort to shooting their ship mounted guns at you, the scoundrels! Their aircraft carrier would attempt to scarper too, but if you could hit it before it exited left of the screen then you would be rewarded with a big bonus.

The way to take out the enemy ships was to increase or decrease the elevation of your ship gun and fire a shell at any of the opposing ships. Meanwhile, one of them would be taking pot shots at you. When your shell landed you would be informed if you had overshot or fallen short (in metres).

You could now adjust the elevation of the gun accordingly to land an accurate shot and sink one of their ships. They would be doing the same thing to you, and you would see splashes in the sea in front of you as the enemy shells landed closer and closer to where you were sitting. If you took a direct hit then one of your fleet would be sunk, and the next enemy vessel would start shooting at you.

It was a case of destroying all four ships before your entire fleet was sunk. On harder skill levels this was no mean feat. Anyway, once you had taken out all of the enemy it would be time to take to the land and assault the beach defences.

Beach Assault:
You would now be in control of a tank (starting on the shore) as it moved across a scrolling landscape (from left to right). There would be plenty of enemy gun emplacements, tanks, mines and brick walls to avoid (why a tank has to avoid a small brick wall was always a mystery!). The amount of tanks you had was related to how many ships you had succesfully brought to shore - so 8 ships would mean 8 tanks.

The aim here was to negotiate your way across the landscape and make it to a huge gun which was mounted on a small mound of earth and stone. Whatever this gun would shoot at was not mentioned, but it had to be destroyed. This stage of the game was made more difficult by the fact that your tank never stopped moving. So, you had to swerve around mines and so on without stopping - no chance to stop and reverse your way out of a tight spot. If you avoided crashing and being shot, then you would arrive at the big gun.

Big Gun:
The big gun would be sitting atop it's mound and would slowly start turning towards you. On the mound were 10 squares, each of which had to be taken out to destroy the gun. Again it was a case of lining your gun up with the correct angle to shoot each square while the enemy gun was slowly turning towards you.

I don't know about you, but I could never get this in one go, the most I could take out without being shot was six squares. Anyway, the gun would finally point at you and blow you to kingdom come as the large shell hurtled straight into your face accompianied by a nice 'splat' sound effect.

You would then be back in another tank at the shore and would have to once again negotiate your way through the (now slightly different) obstacles to the big gun. Taking out the final squares would destroy the big gun which would explode nicely, yet in an A-Team kind of twist the occupant would wave a white flag of surrender. It was now time to break out the cigars as victory was complete.

The seabound levels were more enjoyable than the beach assault levels (in my opinion), and the final two stages let the game down slightly. Still, shooting down the enemy planes and shelling the enemy ships was always fun. If you played the game on hard difficulty then the game did challenge you somewhat.

On Release:
This ZX Spectrum game was a bit of a slow burner. It received a good score in Crash magazine (scoring a credible 79%), which criticised the high price of the game (£7.95 at the time was a bit steep). Still, the arcade elements and variety of the stages ensured that the game went on to be a good seller. US Gold would go on to release many more well received titles over the next few years (such as Raid Over Moscow).

The test of time:
Well we here in the land of Spectrum Games reckon that Beach Head has a certain amount of retro appeal. The playabilty in the seabound stages is still there and the game is challenging if you crank up the difficulty. It still requires some skill to find the right angle of elevation when destroying the enemy boats and planes.

This fine arcade game for the ZX Spectrum is definately worth another look after all these years.

We recommend getting hold of the real hardware - but if not then download a Spectrum emulator and download Beach Head for the ZX Spectrum. Alternatively you could try and play it online.

Mart guides his fleet through the canal before taking on bombers and boats in another classic arcade game - Beach Head:


Arcade Games and Classic Games
Posted by The Retro Brothers at 10:58 am

Are you unsure about the confidentiality of Legitimate Custom Essay Writing Services? Is the deadline to submit your Professional Custom Essay fast approaching and are seeking Already Written Custom Essay that suits your precise requirements?