ZX Spectrum Raid Over Moscow
The cold war arcade game on the ZX Spectrum that really tapped into the era of nuclear paranoia.

Raid Over Moscow was an arcade game perhaps inspired by the movie War Games and also by the famous arcade shooter Zaxxon. The game was divided into four main sections - each one being different to the last. Raid was awarded the coveted 'Crash Smash' award on release. 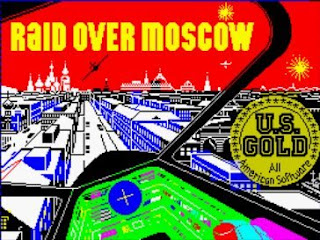 Taking the role of an American pilot, the player must initially stop three attacks on US cities. You have a group of a type of jet fighter which are handily kept in a hangar which orbits the earth. You must launch a fighter (which was actually a really difficult part of the game until you got the hang of it), allowing for low gravity and inertia as you try not to ram into the hangar walls or ceiling.

Once out of the hangar, you must decend your fighter to the Russian city where the launch detection occurred. Once there, the game switches to a side scrolling arcade shooter (quite like Zaxxon, and this part of the game is far better than the extremely sucky version of Zaxxon that was available for the ZX Spectrum).

The final segment of the game was (in my opinion) the weakest section.

On Release:
The game was based around a very serious and touchy subject which was the cold war. Many people thought the very title of the game was offensive and the content of the game was questioned. The tagline on the cassette cover even grimly read 'Play it like there's no tomorrow!' - which certainly touched a raw nerve with a lot of users.

The publicity that surrounded the game ensured it's success, and it went on to be a best seller. The fact that it was actually a good arcade game didn't to it any harm either! The game had a fair amount of variety due to the sections being quite different from each other, and the fact that it had two possible 'endings' was a bonus too. US Gold already had a good repuation from previous releases such as Beach Head, and the look and feel of the game was familiar to gamers who had already played games released by US Gold. These facts also helped sales along.

The test of time:
Well we here in the land of Spectrum Games reckon that Raid over Moscow has stood the test of time pretty well. It still has a degree of playability, the flying sections are fun, and the Kremlin Shootout is a total hoot. By todays standards it is a simple arcade game, but it's worth a quick blast nonetheless - a fine retro game.

Don a flying jacket, watch War Games and stick it on.

This retro shooter for the ZX Spectrum is definately worth another look after all these years.

We recommend getting hold of the real Sinclair hardware - but if not then download an emulator and download Raid Over Moscow for the ZX Spectrum. Alternatively you could try and play it online.

Major flying ace Sir Lawrence Bartle Frere destroys all in his wake and takes care of the enemy silo with ruthless efficieny in another classic arcade game:

Posted by The Retro Brothers at 8:53 am