ZX Spectrum Bruce Lee
Bruce Lee was published for the ZX Spectrum by US Gold and produced by Ocean Software. It was released in May of 1985 and met with a lot of praise due to it's nice mix of platform, beat em up and classic arcade action.

Both US Gold and Ocean already had good reputations within the Spectrum's games market, and Bruce Lee enhanced those reputions further.

The premise of the arcade game was that you (as the legendary Bruce Lee) had returned to the land of your forefathers to destroy a wicked wizard. Succeeding in this would reward you with vast of amounts of treasure whilst obviously freeing the land of the evil control of the wizard.

Starting on the surface, you had to locate the secret entrance that would grant you access to the wizards underground lair. The whole game was based around collecting lanterns from the various locations - the game was of the 'flick screen' platform variety. Collecting lanterns would open up walls, doors, secret passages and so on - so collecting them was essential to progress through the screens.

Bruce could move pretty well around the screens, running left or right and jumping. You could also climb up and down certain parts of the scenery (such as ladders) and could also execute powerful punches and flying kicks. You would need to use all of these moves on a lot of the screens.

Two enemies in this classic game harrased our Bruce constantly, the 'Green Yamo' (even though he was white and not green) and the Ninja. These guys could be despatched with relative ease by repeated flying kicks or punches, but in true South Park Kenny style would reappear almost as quicky as you had taken them out. 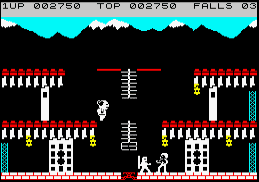 It was not only the enemies that could kill you in the game, you also had to avoid large daggers, exploding plants (?) and electric charges which added more to the game than just jumping and brawling.

To complete the game you had to fight your way through all of the screens (20 I think in total), collecting the lanterns and hit a switch to kill the wizard. After that it was back to the start to do it all again. I always wanted to fight the wizard in true enter the dragon hall of mirrors style - but maybe that's just me.

This nice little mix and match of characters added longevity to the game.

On Release:
Bruce Lee on the ZX Spectrum was well received when it was released, collecting a score of 91% in Crash magazine. Gamers enjoyed the frenetic action, the mixture of platform puzzle and beat em up and the colourful backgrounds. This one was fun to play, easy to get into and was interesting when your friends played as the Green Yamo.

The test of time:
Well we here in the land of Spectrum games reckon that this easy yet classic game is worth another look. It is very simple, but running and jumping across the platforms and collecting the lanterns still holds some appeal. Doling out a good kicking to the two enemies is good for a laugh too. Easy to play, Bruce Lee is a good way to fill a spare 20 minutes. Not a bad little retro game at all.

We recommend getting hold of the real hardware but if not then download a ZX Spectrum emulator and download Bruce Lee for the ZX Spectrum. Alternatively you could try and play it online. Chop chop!

Posted by The Retro Brothers at 4:17 pm

I only just had a go at this game the other day. It's very simple but surprisingly addictive. In fact after reading this great review (cheers Mart) I might fire up the old emulator! I suggest you do the same :o)

One of my all-time favourites. I have fond memories of playing it for five hours straight at a friend's house back in the day. Nice write up.