Spectrum Games Saboteur
Our last review was of the Durell classic game, Combat Lynx. This review is of another great and classic game from the same company, Saboteur.

Saboteur was released for the ZX Spectrum at the tail end of 1985, and Durell now had a glowing reputation as a premier developer of games for the Sinclair Spectrum.

This game was yet another quality title from the Taunton based company, and yep you've guessed it, Saboteur received the coveted Crash Smash award in the christmas edition of the great games magazine.

The games author, Clive Townsend was becoming a household name in the arena of ZX Spectrum games, and this fine retro game did no harm to his reputation at all. Anyway, onto the game....

The aim of the game was to stealthily gain access to a remote warehouse and steal a computer disk and plant a bomb to blow the place sky high before making good your escape. All done against the clock of course. The whole place was guarded with attack dogs, guards, security cameras and remote laser guns.

Luckily your saboteur has been well trained in martial arts and was also pretty handy when throwing objects at people! Your character was a rather cool one. Clad all in black (resembling the classic 'SAS' or 'Ninja' look), you would start outside during the night in a rubber dinghy, leaping out and clambering up the dock to the warehouse. It was time for a bit of sabotaging!

Your character also began the game equiped with a throwing star (or shuriken) - which would instantly despatch any guard (human or dog) you may come across. Items were also strewn around the complex, such as bricks and pieces of lead pipe. These could also be thrown at an enemy with deadly accuracy. 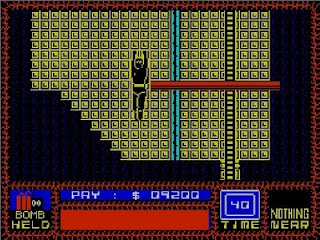 You could also dispatch enemies with a well placed jumping kick or a punch. Each human guard taken out earned your saboteur more cash, but the big bonus was paid to you on completion of the mission.

The complex was quite large, and contained a sewer and underground rail system. These areas would also need to be negotiated to complete the mission. There were plenty of ladders to climb, platforms to negotiate and rooms to explore in classic arcade game style.

It was also possible to 'sneak up' on enemies by moving slowly behind them before taking them out. The mission would be complete once the disk was stolen, the bomb planted and you made your exit via the handy helicopter that was parked up on the roof of the complex.

On Release:
This game was well recieved, and ZX Spectrum gamers marvelled at the large and well animated saboteur that you controlled. The backdrop graphics were well drawn and added atmosphere to the game. The mix of stealth, arcade action and platform elements was a nice mix of genres that worked perfectly. Not even the high price of £8.95 could put buyers off. This game was an instant (and deserved) hit.

The test of time:
Well we here in the land of Spectrum Games reckon that Saboteur has stood the test of time pretty well. It still has a bit of atmosphere and finding your way around the warehouse (and especially to the roof) can take a little bit of working out. Of course today it is a simple game, but this classic arcade game really helped to create a genre of stealth/action games. Raise another toast to Durell folks!

So - grab a balaclava, put on a black roll neck sweater and watch any of the classic Sho Kosugi movies before giving it a go.

We recommend getting hold of the real Sinclair hardware - but if not then download an emulator and download Saboteur for the ZX Spectrum. Alternatively you could try and play it online.

Martial arts exponent Bri uses his mastery of the deadly arts in the retro stealth and action game: