ZX Spectrum Space Harrier
Once again we are looking back at an arcade conversion, and once again it was Elite software who won the rights to convert the mighty Space Harrier from amusement arcade to home systems such as the ZX Spectrum.

Space Harrier had been a phenomenon in the amusement arcades, the bizarre look and feel of 'The Fantasy Zone' resplendent in fast moving 3D graphics coupled with the cabinet being mounted on hydraulics (in the full motion cockpit version) had given gamers a brilliant gaming experience. 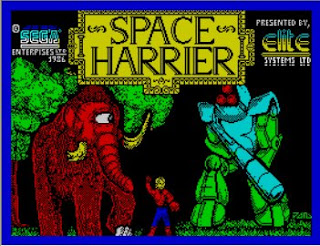 The sound effects, in game speech and in game music had complemented this classic game perfectly too. It was one of the first games to use progressive sprites to create the 3D effect - most other games up to this point had used polygons and wireframe graphics.

Space Harrier was released in 1985 by Sega and it's popularity ensured that it had to be converted to home systems. Converting this piece of software would be an extremely difficult task, and Elites legendary programmer Keith Burkhill stepped up to the plate.

Could the surreal world of 'The Fantasy Zone' (complete with the checkboard ground, alien pods and flying dragons), be crammed into a 48K ZX Spectrum? Well....

This classic game involved your character (the Space Harrier) running or flying in a permanently 3D third person view scrolling landscape. Armed with a powerful gun, you had to blast away the evil nasties that had come to take over the slightly trippy 'Fantasy Zone'.

For instance, rocks would be littered across the ground or could be floating in mid air - and you would either have to shoot them out of the way or weave your way around them if they were 'bullet proof'.

Some of your adverseries would shoot projectiles at you which you had to avoid, ranging from egg shaped energy bolts to faster moving fireballs. Collision with any would result in the loss of a life.

Big enemies such as flying dragons (which weaved beautifully through the air) or huge floating stone heads would appear and would take multiple hits from your gun before being destroyed.

At the end of each level (in classic arcade style) there would be a boss alien (sometimes more than one) to duel with, and it could take a while to wear them down and dispatch them.

The game was spread over 18 stages (which were all strangely named such as 'Minia') including some bonus stages. If you made it to a bonus stage then you would get to site astride a friendly floating chinese style dragon and plow your way through the landscape to earn a bucket load of bonus points.

At the end of the bonus stage your harrier would hop off the dragon which would fly off into the distance and disappear. It would be back to normal action again in the next level.

Later stages produced even more strange creatures such as one eyed wooly mammoths, giant robots and large bulbous squids. Having enemies of this scale in a ZX Spectrum game was quite a neat trick, and this is one aspect of the game that was impressive.

Later levels were tough to negotiate with a barrage of enemies and obstacles to avoid, and sometime a 'roof' would come down over the landscape limiting the height at which your harrier could go to forcing you to zip around the screen like a maniac as you dodged trees, rocks, metal poles and huge flowers.

Making it to the end of a level could be quite 'thrilling'. Ahem.

If you had quicker reflexes than a hyped up cat then you would make it to the end of the game, which matter of factly informed you that it was indeed 'The End'. But don't worry, as 'many more battle scenes will soon be available'.

On Release:
This classic game was hyped up prior to release due to 99% of the planets population knowing it from the arcade. Crash magazine gave it a hearty 77% but described it as a 'near miss', which was probably about right. Still, it went on to do well and sold plenty; perhaps because of the name but most people were happy that a playable and enjoyable version had been released for the Spectrum. It was not a total classic game, but it was good enough.

The test of time:
We here in the land of Spectrum Games reckon that Space Harrier represents a time when arcade cabinets were cutting edge in terms of graphics, sound effects, music and sheer scale. The gulf between the home 8-bit systems was growing larger and there was no way they could match the software properly. Unfortunately there was a period when arcade to home tie ins were all the rage, and the trend continued with attempts to release other games such as Out Run and Afterburner on home 8-bit systems.

The Sinclair Spectrum version of Space Harrier is still playable and fun, and Keith Burkhill worked wonders re-creating the levels and creatures accurately - not to mention the fast gameplay, the superb 3D perspective effect and responsiveness of your in game hero. The version we got for the Speccy could not have been any better.

This arcade conversion for the ZX Spectrum is worth another look after all these years.

We recommend getting hold of the real Sinclair hardware - but if not then download a ZX Spectrum emulator and download Space Harrier for the ZX Spectrum. Alternatively you could try and play it online.

Our hero flies and takes you on a tour of Moot in this fine arcade game...


Classic Games, Arcade Games and ZX Spectrum Games
Posted by The Retro Brothers at 10:00 am