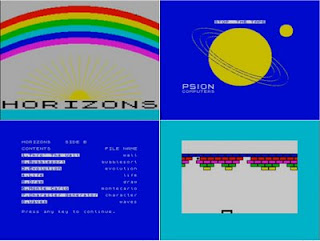 ZX Spectrum Horizons
It was all connected up - the cassette recorder linked to the Spectrum, the ZX Spectrum linked to the TV, and after half and hours messing around the TV was finally tuned in (usually on channel 8) and the following was displayed:

Excitedly you press the rubber 'J' key, the soft click sound that accompanies the word LOAD appearing invokes both awe and wonderment.

After working out how to add "" you finally had what you wanted. You inserted the Horizons tape and pressed play on your tape deck.

Multi coloured lines, strange screeching noises, was this normal? Was the tape ok? You wait for a few seconds, then magically a picture of a rainbow appears. How nice it looks. A few seconds later it is replaced by a picture of a ringed planet and the words 'PSION'. This is it - you're in the space age. Already you are a technological wizard.

A menu with eight options appears, and one leaps out at you and catches your eye.
Top of the list is

The classic game of breakout re-created on a ZX Spectrum. Written in BASIC with little in the way of sound effects, for many users this will be the first ever game they play on their new and trusty rubber-keyed friend.

The game is simple yet you probably played it for hours and hours. The other programs on the Horizons tape probably intrigued you too, but you probably kept returning to Thro' the wall - desperate to knock out those two 1/2 blocks that were almost impossible to hit.

Once you had played the likes of 3D Deathchase and Manic Miner the Horizons cassette was most likely consigned to the back of the cupboard, slowly gathering dust as it was left behind to the advances in gaming and your own ZX Spectrum prowess.

But you know what - despite their simplicity and being written entirely in BASIC, the Horizons programs weren't half bad...

Thankyou Psion for making my introduction to the wonderful ZX Spectrum just that little bit easier.

Not bad for a BASIC progam - a nice a simple version of classic breakout, this classic arcade game kept us going for hours on end...

Posted by The Retro Brothers at 11:18 am

ah memories. I forgot about those 1/2 bricks in Thro The Wall. they were always annoying.

the best thing about it was when your ball broke through the layer of bricks and then bounced along the top row on its own!

Yep - you couldn't beat a 'top bouncer' for ultimate excitement in Thro the Wall... adrenaline pumping it was!

Certainly my thanks go out to Horizons. I was three and this was my first ever gaming experience. At the promise of a prize if I ever got the wall down, hours were spent playing and trying to nail those little half bricks. No bartering with grandparents would get me my prize early.
Yes, getting up to was most exciting and finally getting all the bricks down brought me icecream and a bunch of new games. Also taught me a lesson in perseverence. Manic miner being one of them, such an epic game.

We agree Richard, the Horizons tape was an excellent way to introduce you to games and programs. Thanks for the comments.

does anyone remember what monte carlo was on the horizons tape - I've just seen the menu and cant remember it??

Even though my parents bought Manic Miner and Frenzy with my Speccy in early December 1982, it was Horizons I loaded first. The informative but rather pedestrian screen showing the components of the Speccy (ULA, RAM, TV out etc.)....and then side 2, with more interesting programs.

Hardly cutting edge, even in 1982, but a nice introduction to the Spectrum with both technical and entertainment aspects.

If you were used to the ZX81, that rainbow was really quite something! And for many of us it would have been our introduction to the screen dump...known as the SCREEN$

Yep...thank you Psion, not only for the games software but for Horizons too. I dug out my Horizons tape for the first time in 25 years just last night...and it instantly transported me to my 9 year old self, lying belly down on the carpet, Spectrum on the floor, neck cricked upwards looking up at the colours flashing across the TV...