ZX Spectrum Barbarian
We have already had one classic beat em up on the ZX Spectrum from Melbourne House in Way of the Exploding Fist - so let us discuss another good fighting game from another company (Palace software), Barbarian.

This arcade game was well received when it was released due to it's gameplay, nicely animated graphics and the fact that you were fighting with swords rather than feet and fists. This game really built on past succesfull beat em ups such as Exploding Fist and Yie Ar Kung Fu. 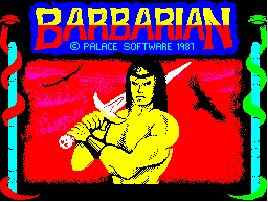 Palace software released Barbarian in 1987 and it notched up a high score in Crash magazine, earning an overall of 85% which was a very good score. The game was an instant hit, and the versions for the ZX Spectrum and Commodore 64 sold really well.

Barbarian is set in a land of mythical creatures, warriors, wizards and warlocks, which made this classic fighting game a bit different from most other offerings in this mould.

In a slight twist in the beat em up genre, there is a backstory to go with the game. An evil sorcerer who goes by the name of Drax (sounds like a carpet cleaner) has a fancy for a rather tasty princess called Mariana. If she is not delivered to him then he will unleash his powers on the Jewelled City - which will probably mean not the best of times for the local townsfolk.

As a compromise, he agrees to let the champion swordsman of the city (a strange Barbarian, who saunters in from the northern wastelands) to compete against his own band of fighters. That Barbarian is you - and it is time for the tournament to commence.

The aim of the game is to defeat Drax's series of opponents in one on one battles of swordplay. As you would expect, each opponent is a better fighter than the last, with greater intelligence and better reactions to your attacks.

Both fighters would start the game with a full amount of energy which would be depleted by the landing of succesfull blows. To win the bout you would have to completely deplete your opponents energy. There were plenty of moves you could perform as the Barbarian (16 in total) which allowed for a good variety of attacks and evasive manouvers.

It was possible to swing your sword and aim for a high blow to the head, mid level blows, crouching chops to the opponents legs, hacking actions into the top of your opponents skull and so on. You could even kick out at them with your leg and cause damage this way.

Everybodys favourity move had to be the full 360 degree turn slash. Your barbarian would spin completely around and swing his sword at your opponents neck level causing alot of damage to your opponent. If you caught him just right, then his head would be chopped off and the bout was instantly over in your favour.

This was a nice touch to the game and was great fun. I don't know about you, but this method of win by decapitation was always good for a laugh - except when it happened to you.

Whenever your opponent was defeated a small lizard like creature would wander across across the screen and drag the corpse away whilst booting the decapitated head like a football - another good touch.

There were four stages to fight through (with four bouts per stage I think), with the background you would fight in changing in each stage. If you were handy enough and fought your way through all opponents then you would face off against Drax in the final battle, who would resort to cowardly fighting and use magic to engage you in combat.

He would hurl fireballs at you from a distance and generally be a chicken. It took a bit of skill to move in close and hack the crap out of him. Anyway, if you finished old Drax off then you would win the day, and also the delectable princess. Nice.

All fights were enjoyable, the characters were well drawn and animated and moved nice and smoothly through their moves - the animation was good back in 1987. The only real let down of Barbarian was the final fight with Drax, which was probably the least enjoyable part of the game.

Still, the playablity of the game (things like rolling into your opponents legs, then booting him in the face as he gets up), the nicely drawn characters, the mythical setting and little touches like decapitations and the snake graphics up each side of the screen marked this as a worthy game to buy. The two player option was good fun too, slicing and dicing your best mate over a Speccy keyboard was always good for a laugh, and added further longevity to the game. 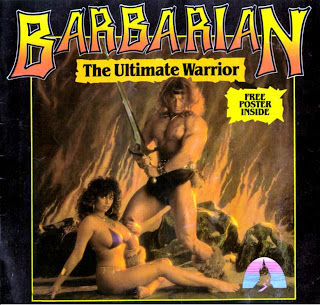 On Release:
Barbarian for the ZX Spectrum was actually popular before it was released. This was due to some 'outrage' at the scantily clad princess on the front cover of the cassette (played by glamour model Maria Whittaker) - many deemed it not suitable for a computer game. The furore surrounding the game ensured its success before it was even released - but it was a great fighting game and any success it gained was well deserved. It was quite steep retailling at £9.99, but most folk did not mind paying a little extra for a quality beat em up. Incidentely The Barbarian on the cassette cover was played by Michael Van Wijk who went on to play everyones favourite villain 'Wolf' in the TV programme Gladiators (UK).

The test of time:
Well we here in the land of Spectrum Games reckon that Barbarian has a good amount of retro appeal. The playabilty is still there, the computer offers you a decent challenge. It is far superior to later awful offerings such as Rise of the Robots. The two player option is still great fun for you and a friend - a classic beat em up game.

So stick on a bit of Conan, flex yer pecks and give this one a go, you'll enjoy it.

This fine beat em up for the ZX Spectrum is definately worth another look after all these years.

We recommend getting hold of the real hardware - but if not then download a ZX Spectrum emulator and download Barbarian for the ZX Spectrum. Alternatively you could try and play it online.

One of Drax's henchment meets cold steel in this classic arcade game:


Arcade Games, Classic Games and ZX Spectrum Games
Posted by The Retro Brothers at 10:02 am