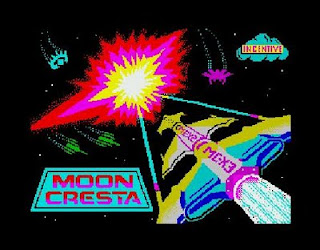 ZX Spectrum Moon Cresta
I suppose when this game came out in March of 1985 it was already 'old school' then. Does that make this classic ZX Spectrum arcade game old-old school?

Incentive Software (and developers Tim Walter and Philip Taglione) re-created the Nichibutsu arcade original faithfully adding another quality shoot em up to Sinclair's rubber keyed micro.
In true arcade fashion there wasn't really a back story to Moon Cresta, but with action this good you didn't really need one.

The game was a classic arcade shoot em up. Set against a downwards scrolling starfield backdrop you had to blast away at hordes of alien ships. Hordes and hordes of them.

You began Moon Cresta with three lives and in a nice touch each 'life' arrived as part of a three-stage rocket which flew to the top of the screen and then separated.

Your first life was the nose stage of the craft which descended to the lower portion of the screen ready to do battle with the alien menace.

This first stage was armed with a single-firing laser making destroying the alien ships a little tricky with your pea-shooter of a cannon. If you lost that life then the two remaining stages repeat the process leaving you with the middle stage to fight on.

The second and third stages each were armed with dual-firing lasers, which made blasting through the bad guys a lot easier. You could move your craft to the left and to the right along the base of the screen - no up and down movements here.

Various waves of the enemy would swoop in and attack you - some of which would split into a smaller alien when shot once. Another hit would finish them off.

After basting your way through a few waves you were faced with a nice little bonus section (as was usual for arcade games): docking the first stage of your craft with the second stage for bonus points. The bonus was based on the time taken to dock as the top craft slowly descended downwards, wavering around. You had to guide it by the left and right controls and applying thrust (with the fire button) to slow the rate of descent. Basically it was very similar to the arcade classic Moonlander - come in too fast and you blow up. Come in too slow and you'll burn away all of your fuel before you dock. Oh the dilemma!

This bonus sequence was then followed by five waves of 'dancing aliens' which included diagonally opposed asteroids and white blobs that morphed into seeking missiles if they were not destroyed in time. The variety of nasties and the way some of them changed kept the pace of the game red hot.

Depending on how good your skills were it was possibe tp 'earn the right' to fight with either two or three rocket stages together as the speed of the aliens increased.

Prety much the full display area was used to depict the action with score lines superimposed at the top of the screen, just like the arcade original.

The test of time:
As we have already said Moon Cresta was already a little 'old school' when it was released in 1985 - and it is a pure shooter of a game. The graphics were nothing special even back then as the game was all about playability, fast reflexes and a faster trigger finger. For those reasons it hasn't dated too badly at all. Still playable, still fun, Moon Cresta is worth playing all over again.
Nice one Incentive.

We recommend getting hold of the real Sinclair hardware but if not then download a ZX Spectrum emulator and download Moon Cresta for the ZX Spectrum. Alternatively you could try and play it online.

Posted by The Retro Brothers at 10:36 am

Did you know that you can shorten your long links with AdFly and earn money from every visit to your short urls.