Steel Eagle ZX Spectrum
This game is a lesser known title from Players Premier Software which was released towards the end of the Spectrum's life in 1990.

It is a classic arcade game that borrows a lot from the likes of Nemesis and R-Type and is one I never ever played back in the day.

So after having a go on it now I reckon it's a playable shmup that is pretty addictive. I'm still not very good at it though!

There don't seem to be any reviews of this game by the likes of Crash Magazine or Sinclair User - so I don't even know how the game was rated back in 1990.

It is the usual horizontal from right to left scrolling type deal with nasties to destroy and scenery to avoid crashing into. The scenery scrolls by very smoothly I must add, even if it is single layer scrolling only. This does not detract from the arcade action in any way.

Some nasties when shot release a token which can be collected to powerup your little craft with rear firing shots, more powerful guns, speed boosts etc etc...

This game also features some great AY Music on the title screen and it is also very well presented overall with cool rolldown effects on the menu screen and high score table.

The in-game sound effects are far too sparse and some meaty explosions or even a looped tune would have gone a long way to adding some atmosphere to the proceedings. Still, this is a playable arcade game that I like a lot.

If you like Nemesis and games of that ilk then you should give this one a go. The Speccy version of Nemesis was never ever good enough anyway - this game is a far more polished effort.

It retailled at only £2.99 too which was great value for an arcade game of this quality.

We recommend getting hold of the real hardware - but if not then download a ZX Spectrum emulator and download Steel Eagle. Alternatively you could try and play it online.

Posted by The Retro Brothers at 8:53 am 3 comments: 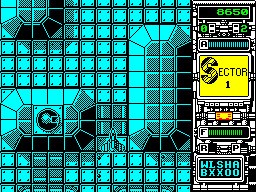