Galakzions ZX Spectrum
Since I'm in ultra-retro game mode at the moment, and the last game I reviewed was Galaxian, I'll stick with it and look at Galakzions from Mikro-Gen.

This game was basically an un-official version of Galaxian, and I tell you what, it's actually not bad.

There is no loading screen (it was released for the ZX Spectrum in 1983 - a time when you could 'copy' arcade originals and get away with by changing the name) and the main menu screen is extremely basic. 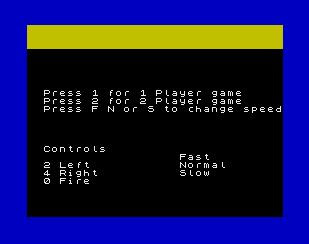 Anyway - 99% of you will know the score. Alien space ships attack in the usual Space Invaders formation at the top of the screen, moving left and right in unison.

You are at the bottom part of the screen and can move left, right and fire. And that's it. Simplicity itself - but this is what makes the game so good.

In a twist from Space Invaders some enemy ships would break from formation and 'swoop' down the screen towards you, firing as they went.

As you cleared each wave, the amount of swoopers increased, making each wave more difficult than the last. 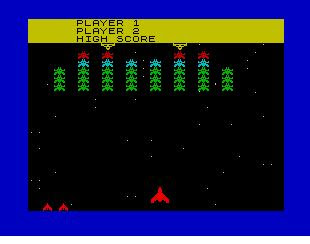 Just like Galaxian the game featured a backdrop of a scrolling starfield. There were also three 'speeds' you could play the game at: Slow, Normal or Fast.

Play it on fast for a real challenge.

There isn't really much more to say about this; it's a version of Galaxian and it's good. Considering this is an earlier ZX Spectrum game it's pretty decent and plays nice and smoothly. Good stuff.

We recommend getting hold of the real hardware - but if not then download a ZX Spectrum emulator and download Galakzions for the ZX Spectrum. Alternatively you could try and play it online.


Arcade Games and Classic Games
Posted by The Retro Brothers at 4:58 pm 2 comments:

ZX Spectrum Galaxian
Surely Galaxian is one of the most well known arcade games of all time?

Atari-soft treated us to the official ZX Spectrum conversion of Namco's classic game in 1984 - and to be fair it did the arcade original justice.

Galaxian basically expanded on the formula pioneered by Space Invaders. As in Space Invaders, Galaxian featured hordes of attacking aliens that took pot shots at the players ship at the bottom of the screen.

Galaxian added a further element of gameplay by having alien ships dive bomb the player's ship (which was called the 'Galax').

Atari-soft managed to cram in the arcade game features, including the opening sequence which proudly stated that 'we are the galaxians' and displayed how many points you would get for each ship type destroyed.

The opening got you in the mood for Galaxian:


The gameplay was relatively simple. Swarm after swarm of alien ships attacked your ship which could be moved left and right at the bottom part of the wraparound screen.

Your ship could only fire sparingly by default, but rearmed instantly when an enemy was blown out of the stars. Once you defeated one swarm of invaders it was replaced by another more aggressive and challenging swarm. As you progressed the amount of 'dive bombing' aliens increased which made things more difficult for the player.

This repeated infinitely until all of your lives were lost.

A plain starfield also scrolled in the background too which looked quite nice.

On Release:
Well Galaxian was considered a bit 'old hat' by 1984 - and even though this version was pretty faithful to the arcade original gamers wanted more. I suppose with games such as Manic Miner, 3D Starstrike and Night Gunner to play, the concept of Galaxian was a bit limited. At £7.99 it was also overpriced.

The test of time:
Well it's not bad to play and captures the spirit of the old arcade machine (which I can just remember). In fact, it's so retro now that it's more relevant today than it was back in the mid 1980's. If you're a fan of Space Invaders or Galaxian then give this a go.

We recommend getting hold of the real hardware - but if not then download a ZX Spectrum emulator and download Galaxian for the ZX Spectrum. Alternatively you could try and play it online.

Classic Games, Arcade Games and ZX Spectrum Games
Posted by The Retro Brothers at 9:58 am 5 comments:

ZX Spectrum Krakout
The Spectrum went through a spate of breakout clones, and this was yet another one from the folks that brought us the likes of Trailblazer and Avenger.

Okay, so it's basically Breakout or Arkanoid except turned on it's side. Here you bat from either side of the screen rather than the bottom. One cool feature of the game was the fact that you could select to bat on the left hand or right hand side at the beginning of the game.

You could also select from six 'speeds' of play which added a little variety to the gameplay. The highest speed was only humanly possible if you'd drank 2 litres of Jolt Cola.

There was some real 'clutching at straws' back story about an 'awesome ogre' who had to be defeated, but we won't even go there.

So we've got coloured blocks, a bat and a ball. Time for some classic arcade action. Game on.

As usual for an Arkanoid type game there were various powerups and block behaviour within the game.

For example some bricks when hit rolled over to reveal bonuses. Bonuses that could be got included:

Glue: The Ball sticks to the bat
Bomb: There is a massive explosion destroying adjacent blocks (wo-hoo!)
Shield: Makes a barrier appear behind you (nice)
Missile: Gives you one missile to fire (not very exciting)
Slow down: Slows the ball down slightly (handy)
Times two: Doubles scoring (More precious points)
Double bat: Gives you another bat in front of your present bat. (super!)
Extra man: Gives you an extra life
Expand: Makes your bat expand (no dodgy comments please)

Aside from all this you had the blocks that took multiple hits to destroy and the aliens floating around the screen which could divert the path of the ball if struck by it.

If you like Arkanoid then you will probably like this game. It's easy to pick up and play, the graphics are okay for the era and the controls are responsive enough. The fart noise that accompanies the destruction of an alien becomes a tad annoying after a while though.

On release:
Well this game perhaps came at a time when us ZX Spectrum gamers were becoming a little fed up with Breakout type games. I remember Crash magazine gave it less than favourable review - but this was a rare occasion where I didn't really agree with them. At only £4.99 this game represented great value for money and was a playable Arkanoid type variant. It ended up being a reasonable hit for Gremlin Graphics.

The test of time:
This classic game is easy to get into, playable and you know what you are getting. Not a bad way to pass half an hour and to be fair this game hasn't aged too badly at all.

We recommend getting hold of the real hardware - but if not then download a ZX Spectrum emulator and download Krakout for the ZX Spectrum. Alternatively you could try and play it online. 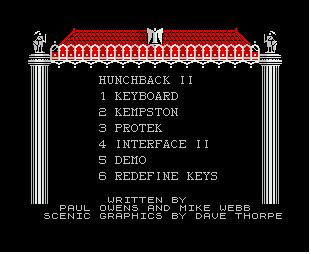