Guardian II - Revenge Of The Mutants
Well the title of the game is a bit of a mouthful, but what we have here is a very good version of the classic arcade game Defender.

This game was released for the ZX Spectrum in 1990 - so it really was a retro game back then as the original arcade game had been released in 1980.

Anyway, most of us know the deal with defender, and this version of it held no special surprises over the original. What it did do was capture the playability of the arcade version nicely. 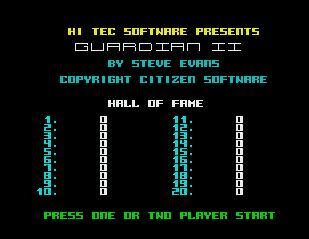 The game took place over a two-way scrolling landscape and all of the Defender type bad guys were present in the game. It was you and your trusty fighter against the mutant menace.

There were ten humans on the surface of the planet, and it was up to you to keep as many of them safe as possible. The raiders would swoop down and pick up one the little guys and make their way to the top of the screen. If they made it to the top they would mutate into a more aggressive foe (a mutant) - whilst the human was destroyed.

If you shot a mutant carrying a human you would have to 'catch' him with your fighter before he hit the ground with a splat. Doing so allowed you to gently drop him on the surface and also earned you some extra points. 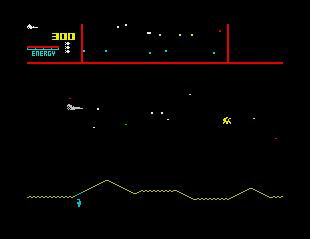 In classic arcade fashion the nasties had cool sounding names and different modes of movement and attack. Aside from the raiders (and mutants) you had to contend with Baiters, Lures, Luresses (yes), Hives, Dynamo's, Mo's, Swarmers, Munchie's, Fire Bombers, Technofighters and Fireballs.

There were also warp gates on each level allowing you to 'jump' from one part of the landscape to another. Useful to escape from a sticky situation.

You were equiped with a limited supply of smart-bombs. Useful for blowing the sh*t out of everything on screen.

Another 'extra' was the Energy Cloak which allowed your fighter to become invisible and destroys every alien you came into contact with for a limited time period of one energy unit. Useful for clearing away annoying buggers.

As all Defender fans will know, if all the Earthlings were destroyed then the planet was lost and the fight continued in space against Mutants alone.

The game was over when all of your lifes were gone.

This was probably an unusual game to come out on the Speccy in 1990 - but as far as arcade games go, this is a very good version of a classic (which I like a lot). The controls are responsive, the scrolling is spot and and the sounds effects match the game perfectly. It's got to be one of the best Defender type games on the machine - and this game (and Planetoid on the BBC Micro) is one I return to time and time again.

Oh and it was nicely priced back in the day at £2.99. Good stuff from H-Tec Software.

We recommend getting hold of the real Sinclair hardware but if not then download a ZX Spectrum emulator and download Guardian II - Revenge Of The Mutants for the ZX Spectrum. Alternatively you could try and play it online.

Posted by The Retro Brothers at 8:30 am 2 comments:

ZX Spectrum Light Force
This is a classic arcade shmup released by the cool sounding FTL, which was an off-shoot of Gargoyle Games who were famous for the likes of Tir Nar Nog and Dun Darach.

Anyway, this game must go down as one of the better vertically scrolling arcade games on the ZX Spectrum, and when it was released in November of 1986 it caused quite a stir.

It also had a pretty cool back story. How's about this for a slice of epic pie?

A bunch of human colonists had settled around Regulus for a number of years when, one one FATEFUL DAY... alien craft began to land at key installations around the human settlements!

So, instead of sending a galactic army to respond to the alien threat it's lucky old you who has to go in single handed and save the day. As well as the galaxy. All in all it's all a pretty much standard arcade game 'excuse' to drop you into the action.

Those alien invaders will rue the day that they took on you in your Light Force fighter! Probably.

So, the scene was set for you to emerge from light-drive and send the aliens scuttling home with their tails between their legs. If they even have tails that is.

All you really need to know is that you have to blast the sh*t out of hordes of enemy ships, ground based turrets and energy domes.

The screen scrolled from top to bottom and you could move your ship up, down, left and right. It was also equiped with a double barrelled lazer cannon for blasting those nasties to kingdom come.

What was immediately apparent was the lavish colour splashed throughout the game. The aliens were multi-coloured, green and blue planets scrolled smoothly past and yellow/green enemy space platforms were there for you to gleefully destroy.

The game didn't just take place in space though. Oh no. You could descend to each planet's surface by destroying the invaders orbital stations which allowed you to descend to the surface and take out the control stations there. Once you had blown the lot away it was onto the next planet, giving plenty of level variety throughout the game.

There was a jungle planet, an ice planet, a barren desert planet, and finally the alien factories. Destroying the factories meant victory - and you sent those alien slimeballs back across the space pesos. Each control station destroyed added a hefty bonus to your score too.

Aside from the planets there was also a lovely asteriod field to negotiate, which meant quick reflexes and a cool head.

You could also pick up extra weapons (typical arcade powerup) from time to time.

On Release:
This game was praised for it's use of colour combined with smooth scrolling. Whilst the scrolling was not quite on a par with the likes of Cobra - it was still quite something to see colour splashed around moving smoothly with hardly any colour clash (take note Wally Week!). Graphically the game was amazing and the fact that it had plenty of arcade action sealed it as a must have game for shmup fans. Crash awared it a Smash and described the use of colour as revolutionary. The only downside was the spartan sound effects, but it was a small price to pay for pure eye (and trigger!) candy.

The test of time:
Well, if you like classic arcade games then you won't go far wrong. This game still plays quite well, the controls respond quickly enough and the enemy formations keep you guessing. I can see why this game was heralded all those years ago (I remember it well), and it's definately worth digging out again. Not bad. Not bad at all.

So, watch the Last Starfighter to get you all nostalgic then play this one again.

We recommend getting hold of the real Sinclair hardware but if not then download a ZX Spectrum emulator and download LightForce for the ZX Spectrum. Alternatively you could try and play it online.