This game came out towards the end of 1986 and was 'loosly' based on the Sly Stallone movie.

When I say loosely I do mean loosely, Cobra was a scrolling 'kill everything in sight' arcade game that emphasised cartoony violence and humour.

For a start when you defined your keys the menu said 'Push Me' in reference to Sly himslef and the shoot key was labelled as 'murder'. Funny stuff.

Anyway, the aim of the game was to rescue a model called Ingrid Knutsen from the clutches of the Night Slasher and his evil henchmen and hench-women.

Cobra was a scrolling arcade game (with super smooth parallax scrolling, perhaps the best generated on a ZX Spectrum) and you ran either left or right. The bad guys would run in from both sides of the screen and attempt to kill you.

To begin with our Cobra had no weapon and you had to defend him with his bonce, by head-butting everyone with such force that they were sent hurtling across the screen. 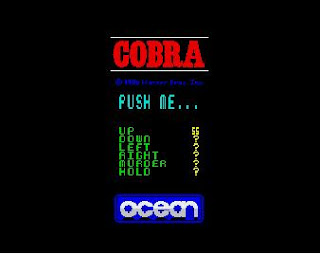 Weapons were hidden inside hamburgers (yep!) and you could pick up either a knife, a pistol or the rather cool lazer sighted machine gun (made famous in the movie). These powerups only lasted for a certain amount of time though - represented by the slowly vanishing rubber duck at the bottom of the screen!

Cobra was a tough guy and dealing with knife brandishing thugs and rocket-launching evil women didn't scare him in the least. However, the mere sight of a pram hurtling towards him made the poor guy go weak at the knees and he was momentarily stunned if you didn't avoid the pram. Why pram's were hurlting around the screen is anyones guess!

You had three lives to begin (represented by 'Rocky' style boxing gloves) with and contact with any bad guys (or the knives they threw, rockets launched etc) took one away - unless you were toting a weapon in which case you lost the weapon and went back to headbutt mode.

Even when it was game over (or game under) it did make you laugh as you entered your name in 'The Morgue'. 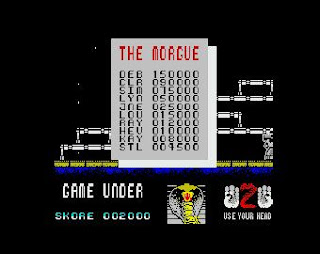 Every now and again Ingrid would show up and run alongside you. This made you survive 'one hit' from a nasty. Instead of losing a life Ingrid would merely run away and would not appear again for a while.

To complete the level you had to dispose of every bad guy and use up every hamburger powerup. Once done you would move to the next level. There were three in all, but I've never made it past level two!

On Release:
Well the movie of the same name had been pretty popular, and the game turned out to be to. It was well recieved with gamers enjoying the parallax scrolling, excellent tunes and the funny stuff. Magazines such as Crash raved about the game and it was a deserved big hit. It was always nice for a movie tie-in to be worthy and not a quick cash-in.

The test of time:
Well here in Spectrum Games we like a bit of Cobra. It is still playable and good for a laugh. The parallax scrolling is excellent and the graphics have the right cartoony style. It's bloody difficult though!

Give this classic game a go - the gameplay is still there but beware, it's not easy!

We recommend getting hold of the real Sinclair hardware but if not then download a ZX Spectrum emulator. Alternatively you could try and play it online.

The all too familiar game over ditty:


I'm sure NOT the cure in Cobra - a brilliant scrolling arcade game: