ZX Spectrum Jet Set Willy
Since we're in platform game mode (looking at Brian Bloodaxe last week), we may as well keep it that way as we look at one of the most famous platform games (perhaps any game) of all time.

Jet Set Willy (or JSW) was the follow up to the legendary Manic Miner (which we looked at back in May) and was released in May of 1984 by Software Projects. Once again programmer Matthew Smith stuck gold with Jet Set Willy which ended up being even more popular than Manic Miner.

In fact, this really is a true classic game that is known throughout the gaming community.

Our hero Miner Willy had become very rich due to his discoveries in the lost mines of Surbiton - his exploits as a 'manic miner' had paid off. Willy was now living the high life in a huge mansion which boasted more than sixty rooms (game screens - clever eh?) and had just thrown a huge party. The guests had left the place in a mess and Willy's housekeeper (the fearsome Martha) would not allow our poor tired hero get to his scratcher until the whole house had been tidied up.

And so begun Jet Set Willy....

Jet Set Willy managed to capture the magic of Manic Miner and added on more style, more locations and more fiendish puzzles to overcome. This arcade game featured the same wacky humour (such as rooms called 'we must perform a quirkafleeg' and the 'nightmare room' where Willy turned into a bat!)

The game also featured the usual strange range of nasties to avoid such as 'killer jellies' and rogue penguins - with each screen usually having it's own unique set of enemies adding more variety to the game.

Making the game a flick screen adventure was a good move by Smith too - a lot of the fun in the game could be had by 'going exploring' and trying to work out how to reach certain rooms. As usual your character could move left and right and could jump.

On at least one screen there was a swinging rope - a novel twist - which you had to 'jump' onto and use it to swing across the screen tarzan style. All of these touches made Jet Set Willy on the ZX Spectrum even better than the already classic Manic Miner.

This game also goes down as one of the first to feature 'anti-piracy' coding. Once the game had loaded you were presented with a screen asking for colour codes to be input - and the codes were stored within the cassette inlay card. 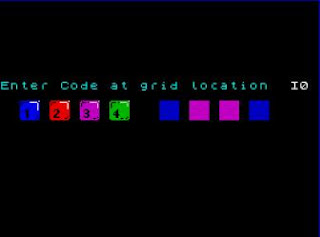 Jet Set Willy was a very addictive and innovative game when it was released and became one of the most talked about and POKED games in the history of 8-bit gaming. The game featured a yacht which was spread over two screens (Willy was VERY rich!) and rumours were spread about how you could activate a secret switch to make the yacht sail away to a tropical island! It was of course not true - but Matthew Smith would actually put this feature into the follow up Jet Set Willy II.

Unfortunately JSW was actually uncompleteable in it's original form. There were numerous bug throughout the game that made it impossible to collect all of the items - meaning you could not finish the game. The most famous of these was the 'Attic bug' - whenever you entered the room 'the attic' all other screens that you visited from that point onwards were corrupted. Software Projects quickly released POKES (the only way to 'patch' games back in those days) to fix all of the bugs in the program. Once the game was POKED it was possible to complete it.

Plenty of home users POKED the game themselves and a various editing tools became availabe allowing anyone to alter existing rooms and even to create new rooms and sprites. This made JSW last even longer for lots of gamers - an almost endless variety of rooms and nasties could be created this way.

On Release:
Jet Set Willy was the talk of classrooms, offices and homes up and down the land when it was released in 1984. Many had doubted that Matthew Smith could live up to his classic Manic Miner (a sequel to a true classic is never easy) - but despite the bugs in the game (people tended to 'not mind' these things back then if the game was good!) he did manage to surpass the first game in every way. The graphics were improved overall and sixty screens to explore was quite a feat back then. This and the imaginative rooms and nasties made JSW a top, top game. Crash Magazine smashed it, awarding JSW as whopping 95%.

The test of time:
Playing this game again brings back all of those memories - the room names come flooding back to you as you make your way around the mansion. It's never going to hold your attention for hours like it did twenty five years ago, but the old magic is still in there. JSW reminds me of a time when lots of locations in a game was totally impressive and a lot of the fun was simply finding new screens. Here in Spectrum Games we reckon (probably along with everyone else!) that Jet Set Willy is a true classic in the platform genre, and even a classic in the arcade genre.

We recommend getting hold of the real hardware but if not then download a ZX Spectrum emulator and download Jet Set Willy for the ZX Spectrum. Alternatively you could try and play it online.


Classic Games, Arcade Games and ZX Spectrum Games
Posted by The Retro Brothers at 9:59 am