ZX Spectrum Spectipede
The classic game was first published in 1983 by R&R Software and was then re-released for the ZX Spectrum in 1984 by Mastertronic.

At only £1.99 it was a decent version of the classic arcade game 'Centipede'.

Kevin Allison (who didn't seem to develop any other ZX Spectrum Games) created a well rounded version of the game with plenty of options and features, and it was all crammed into 16K of RAM too.

No real story to Spectipede (or Centipede for that matter) it was classic arcade action and a case of shoot the nasties and survive as long as possible.

Different creatures inhabited the screen such as spiders, scorpions, fleas and of course the 'Spectipede'. Plenty of green coloured mushrooms were dotted around the screen too and things would get busy pretty quickly.

The aim of the game was to shoot the Spectipede which headed for you avoiding the mushrooms as it moved.

Fleas descended the screen leaving new mushrooms behind (mushroom making fleas?) and needed two hits to kill them, speeding up after the first hit. Sneaky eh?

Scorpions wandered across the screen poisoning any mushrooms they touched.

Spectipedes would drop straight to the bottom of the screen when they ran into a poisoned mushroom, but if you were quick you could get underneath it and destroy it with rapid fire as it descended straight down.

Whilst all of this was going on Spiders would randomly appear and try to jump on you. This game was rapid arcade action all the way.

The game would award you with an extra 1500 points for clearing a screen (by destroying the Spectipede) and an extra life for every 20000 points gained.

As you progressed through the levels the game really did hot up and took a lot of skill (and luck!) to keep going.

One or two players could take part, in two player mode you took alternate goes on each life lost.

The keyboard play was nice and responsive and most joystick types were supported by the game too.

Oh, and the cassette sleeve and inlay had slightly bizarre and cartoony images. 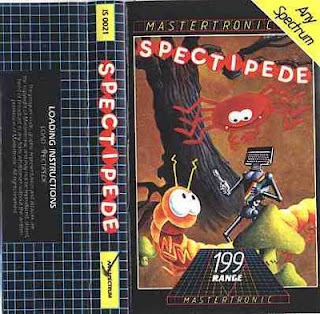 On Release:
This game was never a massive hit and I can only remember the Mastertronic release. With this game being available in 1983 and also running on a 16K Spectrum it really is one of the early gaming classics for the Sinclair machine. We are talking real retro gaming with this title! Games like this were still popular in 1983 and here we had a really good version of it for the ZX Spectrum. At only £1.99 you couldn't really go wrong and it was regarded as one of the better Centipede clones you could get.

The test of time:
Well here in the land of ZX Spectrum Games we have a real soft spot for this classic game. When you play it you just know it really is one of those early simple games that is all about fast action and quick reflexes. As the 1980's wore on games became more complex in concept, design, story and graphics. Consequently Spectipede is a playable version of a classic game, and would probably keep your attention for a good twenty minutes. Not bad, not bad at all...

Hone those reflexes and download Spectipede for the ZX Spectrum. Alternatively you could try and play online.

Please see our other game reviews - all links are listed in alphabetical order. Cheers guys.

Mart used to be good at this, honest! Classic Arcade Action:

Classic Games, Arcade Games and ZX Spectrum Games
Posted by The Retro Brothers at 7:24 am

There's a chap on Youtube who apparently is the author of the game, though I can't be 100% sure. He's not been online for 2 years but if you wanted to contact him, his username is givernychelt. He replies to a review of his game, although for some reason his original reply about making the game has vanished....

Yes, he is the real deal.