ZX Spectrum Spookyman
This is a rare and very early arcade game on the good old ZX Spectrum, released waaaay back in the early days (1982!) by Abbex Electronics.

The games author David Webb would go on to write some popular programming books for the Speccy as well as creating the vector graphics arcade classic Starion.

As you may have guessed, Spookyman was basically a pacman game (clone), and was a pretty good rendition of the Pacman on the Speccy. 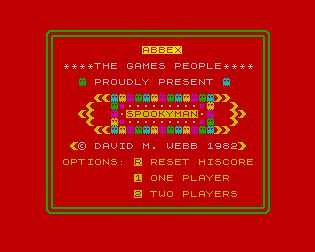 Spookyman managed to cram in plenty of the arcade game features such as pac dots, power pills, hearts, clubs and diamonds to eat and of course the spectral looking ghosts who roamed around the maze.

Also there was the 'wrap around' part of the maze where you exit from one side of the screen and re-appear on the other, which was always useful for getting yourself out of a sticky situation.

It must also be said that this game moves at a fair old pace. Your Pac Man style character zips around the maze rapidly and it can take a few plays to get used to it. Once you get the hang of the speed though you can nip around that maze and avoid the nasties pretty well.

A good feature of this classic game is that when you eat the power pill the ghosts stay 'eatable' for a decent amount of time, giving you plenty of opportunity to chew through them and rack up that high score. Incidentally the high score can be re-set any time you wish- another nice little feature.

All in all, if you like Pac Man then give this one a go, it really is testament to early ZX Spectrum Games.

Spookyman was doing well until he was distracted by someone... classic arcade action:


Arcade Games, Classic Games and ZX Spectrum Games
Posted by The Retro Brothers at 8:24 am

Anything you want to know about Abbex and its games i will be happy to tel you. I also have copies of all of their games, still.

You attain full value for the money which you put in to access when you seek who can write my research paper, as well as other types of best writing services from our firm which include dissertations, theses, reviews any different writings.