ZX Spectrum Penetrator
Another fine version of the classic arcade game Scramble, Penetrator was released for the ZX Spectrum by Melbourne House in 1983.

As everyone knows, the game was a right to left scrolling shooter and you had to destroy suface to air missiles and radar stations.

Your fighter could move up and down as well as 'thrusting' forwards and 'braking' backwards.

Also, due to the forward momentum requirements of your fighter, you could not stop the craft for any length of time - this is why the game was a constant scroller!

Your fighter was also equiped with a forward firing missile launcher (allow rapid fire) and a bomb launcher to destroy ground targets. Only two bombs could be in the air at one time though.

The enemy radar bases added some depth to the game. The bases did not fire at you, but attempted to track your flight path. They would then send more accurate information to the missile launchers making them more difficult to avoid. Destroying the radar bases quickly was an effective strategy to keeping the 'danger level' to a minimum. 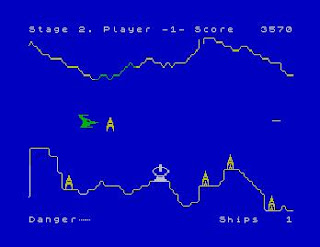 The danger level was displayed on your console, and continued to build as you penetrated further into enemy territory. There was only one sure fire way to reduce the danger level - blowing up the cool sounding neutron bomb store, thereby damaging the enemy missile command centre. Bwah ha haa!

The game was kept fresh by the varying levels (flying through caverns was quite tricky) and differing enemies. Some levels had paratroopers to shoot and avoid - a nice twist to Scramble!

On release:
Scramble arcade games were all the rage when this game was released on the ZX Spectrum and Penetrator was a pretty good version. The game was quite 'customisable' too - allowing you to run training simulations with unlimited lives, re-define the landscape and even alter the positions of enemy missiles and radar stations. Impressive stuff. Penetrator is a true retro game (check out the opening!) and was popular way back in 1983.

The test of time:
Well Scramble is a classic arcade game, and Penetrator is a pretty playable version on the good old Spectrum. We here in Spectrum Games reckon it's one of the better versions and is definately worth a go. It will keep you amused for a little while.

Grab your joystick and give it your best Penetrator.

We recommend getting hold of the real Sinclair hardware but if not then download Penetrator for a ZX Spectrum emulator. Alternatively you could try and play it online.

Posted by The Retro Brothers at 10:26 am

How the hell do you get the laser to work???

You either tap on the P key, or press it while going back (with O)