At only £1.99 it represented good value for money - and to be honest for the low price was a pretty decent shooter.

The whole story of the game was a bit of a saga....

If anyone remembers the proposed 'star wars' orbital defence thingy, well in Gunstar a race of aliens had invaded Earth, easily bypassing it. Now every last one of us had been enslaved; the future looked bleaker than a bleak thing from planet bleak... until a final make or break plan was hatched.

A research team had remained hidden from the alien menace and developed a series of (the cool sounding) pulse fighters. An expert team of ace flyers known as the 'Gunstar' pilots were ready to do battle with the aliens and 'hammer punch them back off the planet'. Phew.

So onto this classic budget ZX Spectrum game. Gunstar was a vertically scrolling top down arcade game in the tried and tested tradition. You began with three lives (each life was one of the Gunstar pilots - all of which had their own hobbies and craft type which was shown to you in a neat touch as you began the game).

As you were launched it was straight into battling with alien craft as they swooped across the screen taking pot shots at you. Arcade gamers would be familiar with the almost 'galaxian' style formations and movement of the baddies. Your craft could move left, right, up and down (it was nice and responsive to your movements) and could of course fire (pretty rapidly) lazer pulses which chewed through these invaders with ease.

Once your Gunstar pilot made it through the first wave of fighters it was into an asteroid belt where the idea was to weave and shimmy your way through. Apparently the possibility of successfully navigating an asteroid field is approximately 3,720 to 1 too. Anyway, for some reason your weapons did not work in this stage of the game, so it was all about reflexes - pah!

Now that you had expertly weaved your way through the asteroids it was time to take on the enemy command ship in true classic arcade fashion. To defeat it you had to knock out all of it's defences (gun emplacements) - which could take a bit of work. Anyway, now that the command ship was out of the way it was on to an alien robot.

In a twist, this enemy robot was defended by... gun emplacements. Taking all of these out would allow you to rendezvous with the mothership for a quick refueling before blasting off to take on yet more waves of the alien menace.

Oh, and the high score table was pretty humorous too. 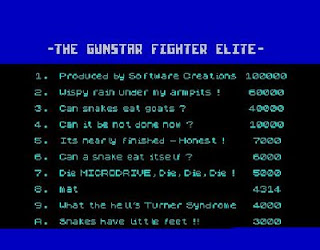 On Release:
Gunstar was well received for a budget game when it was released for the ZX Spectrum. At only £1.99 it represented good value - it was a solid enough shooter and was well worth the money. It became a popular budget choice.

The test of time:
Well this arcade game is very simple but strangely quite playable. You would never sit and play it for any length of time but here in the land of Spectrum games we reckon Gunstar is a good way to pass a spare fifteen minutes. One annoying aspect of the game is the fact that sometimes the enemy fighters bullets are difficult to see in amongst the other explosions. This aside, it is one of those 'quite cool' little games that is definately worth a shot.

Give this one a go, but remember, stick to your guns.

We recommend getting hold of the real hardware - but if not then download a ZX Spectrum emulator and download Gunstar for the ZX Spectrum. Alternatively you could try and play it online.

Posted by The Retro Brothers at 3:51 pm

I wrote this game! Glad to see there is still so much interest in the old Speccy. I wrote it using a Tatung Einstein linked by RS232 to a spectrum in my bedroom and went without sleep for two days to make the deadline and an early completion bonus. My parents turned off the heating at night and rather than freeze, I sat in a sleeping bag at my desk. The 0247 on the launch ship was the PIN for my cash card at the bank! Some of the pilots names were kids in my street!
Thanks for the kind review :)

Thanks for the comments Peter - sounds like you had some fun putting it all together to meet that deadline! Please look back here from time to time, we will have more of your games featured on here in the future..