ZX Spectrum Pac Man
Pac Man is probably one of the most famous arcade games ever, and this conversion by Atarisoft was released for the ZX Spectrum in 1984. The arcade game had first hit Japan in 1980, with units popping up in the USA shortly after. For the ZX Spectrum (and general home gamers) the 1984 release was probably a little too late.

Almost everyone in the known galaxy knows the PacMan game, but for those of you who have been living on Dantooine for the last thirty years, here is a quick rundown:

The player controlled Pac-Man through a maze eating pac-dots. If you managed to eat all of the dots Pac-Man was taken to the next stage. All the while, four ghosts (Blinky, Pinky, Inky and Clyde) roamed the maze trying to catch Pac-Man. If a ghost touched Pac-Man, a life was lost. Once all lives had been lost the game was over. Pac-Man could be awarded a single bonus life at 10,000 points - if you were a competent player.

Near the four corners of the maze were larger flashing dots known as power pellets. These pellets empowered Pac-Man with a temporary ability to eat the ghosts. When this was active the ghosts would turn a light blue (cyan) colour, reverse direction, and usually move more slowly. 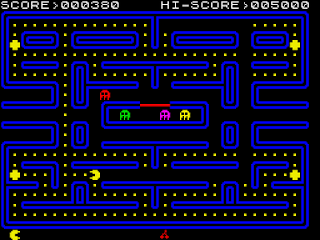 When a ghost was eaten, its eyes returned to the 'ghost home' (in the centre of the maze) where it was regenerated. Blue ghosts flashed white before they turned dangerous again and the amount of time the ghosts remained vulnerable varied from one level to the next. The time period generally became shorter as you progressed through the game.

In addition to Pac-dots and power pills, bonus fruits appeared near the center of the maze which could be munched for extra bonus points. These items increased in points value throughout the game.

On Release:
When Pac Man was released for the ZX Spectrum, the arcade game had already been on the go for around four years. Whist still popular, arcade goers and Speccy gamers had been treated to far more advanced offerings, and Pac Man was unfortunately a little bit 'old hat'. Still, it was nice to have an official conversion of the game - (there had been blatant copies of Pac Man such as Munchman) it's just a shame that the ZX Spectrum could not quite capture the magic of the original game. The famous Pac tune and sound effects could not be reproduced which was (and still is) part of Pac Man's charm.

The Speccy version of Pac-Man does not quite manage to capture the magic of the arcade game:

Classic Games, Arcade Games and ZX Spectrum Games
Posted by The Retro Brothers at 9:00 am

Generic Viagra said...
This comment has been removed by a blog administrator.
8 September 2010 at 23:11