Atari released Paperboy back in 1984, and it captured the imagination due to it's different concept and rather cool 'handlebar' controls. Elite software (who had already succesfully converted Ghosts and Goblins and Bombjack) won the license and yet again managed to produce a good conversion from Arcade to home 8-bit micro's. The game was well received and scored a very nice 88% in Crash magazine. 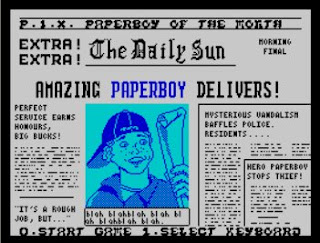 The game involved controlling a paperboy and as you may have guessed, deliver newspapers to houses. Sounds like fun eh? Well, it was a lot more fun than a real paper-round, I can tell you!

This ZX Spectrum game stood out as being different, and the mid-eighties BMX craze helped to increase it's popularity.

Anyway, riding your BMX you would pedal up a scrolling street (rendered in a nice isometric view) and throw papers from your bike to the houses that wanted a delivery. You would do this by throwing the paper into the residents mailbox to score points. If you missed the house then the residents would not want a delivery on the following day - narky b*stards eh?

It was possible get your own back on these non-subscribers though. Pedalling through the diagonally scrolling landscape, points could also be gained by firing a newspaper missile through the window of a house with a darkened door (a non subscriber). Well aimed newspapers could result in broken window panes, chopped up tomb stones and ruffled dustbin lids.

Anyone with a nasty streak would enjoy zapping grannies out of their bath-chairs as they enjoyed the early morning air, riders could be knocked off mopeds and flower beds could be flattened. Sounds a bit like my neighbourhood come to think of it.

The papers (or ammo) in your delivery bag were displayed on a panel to the right of the screen, and extra papers could be collected by cycling over the boxes of newsprint dotted around the pavements. These top-ups were usually in hard to reach places and required some cute cycling to collect them unscathed.

There was more to the game than just hurling papers around the streets though. Careful cycling was needed to negotiate a variety of obstacles including dustbins, rogue rolling tyres, garden ornaments and fire hydrants. Pensioners would seem to walk into your path deliberately and workmen would not hear you approaching because they were wearing ear-plugs. Skateboarders were tough to avoid as they raced around at high speed, and exploding bombs (it was a particularly rough neighbourhood) would also crop up from time to time.

Contact with any of these obstacles resulted in a collision and the loss of one of your five lives. A scrolling message would appear informing you of what a silly Paperboy you had just been.

The game took place over each day of the week and the paper-round had to be completed before you could head up to the BMX track which was located at the end of town. For some reason targets were dotted around the track and bonus points could be collected for hitting them with a well thrown newspaper.

At the end of the day's delivery you would be shown a report on your progress. For every paper wrongly delivered the house would cancel its order and if too many of the houses un-subscribed then you get your marching orders and it was game over. It was possible to claw subscribers back by delivering all papers on a round. The game did get more difficult as each days of the week went by. If you made it through the week then the game was completed - which was no mean feat.

On release:
This retro ZX Spectrum game was another game that was highly anticipated due to the popularity of the arcade version. The main drawback was the lack of the 'handlebar' controls (which did detract from the game slightly) and the blue/black graphics - the arcade original had been very colourful. Still, the game was playable and fun, and was a pretty good rendition of the original from Atari. The scrolling on the Spectrum was nice and smooth too. The name 'Paperboy' ensured that it was a big hit.

The test of time:
This ZX Spectrum game is really a product of it's era. It still has a degree of playability - and you just know it is a mid 80's game. Once again it is amazing to think that a cutting edge title could be roughly converted into a machine with only 48K of RAM. Steve Lamb and Tony Mac did well with this one.

Stick on a bit of BMX Bandits, down a can of Quattro and give it a go. Just make sure you've got your aim straight.

This retro arcade conversion for the ZX Spectrum is worth another look after all these years.

We recommend getting hold of the real Sinclair hardware - but if not then download a ZX Spectrum emulator and download Paperboy for the ZX Spectrum. Alternatively you could try and play it online.

Posted by The Retro Brothers at 9:56 am