ZX Spectrum Commando
Some classic gaming shooters never die, and Commando for the Speccy is one of them.
This was originally an arcade game released in 1985 by CapCom.

This vertical scrolling arcade game was converted to several home computer and console formats. The ZX Spectrum version was well recieved, recieving the coveted 'Crash Smash' award (from our favourite magazine) in December 1985. 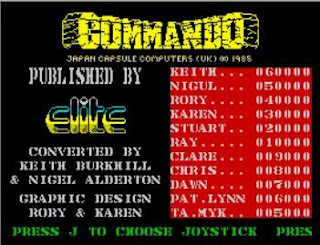 The game involved you taking the role of a crack commando - 'Super Joe' (The 80's came up with some great character names eh?).

Your mission: To penetrate deep behind enemy lines and destroy their two main fortresses. The game takes place over a vertically scrolling landscape and you are armed with a sub machine gun and a few grenades. Okay, by todays standards the game is pretty simple, but back then it was a pretty faithfull conversion of a popular arcade game.

The vertical scrolling is nice and smooth and the landscape is pretty well drawn. The screen can get pretty busy on later levels without much of a slowdown at all - a testament to the developers Keith Burkhill (who some of you may also remember for games such as Missile Defence) and Nigel Alderton.

There are some nice touches in the game such as the soldiers on bikes, running under bridges, green coloured officers, and jeeps that would sweep across the screen and take a couple of pot shots at you. It was not an easy game by any stretch (on the Speccy anyway), and the later levels with caves for the enemy to hide in and rivers to negotiate provided a hard but fair challenge.

No powerups were available save for collecting more grenades which were strewn around the landscape, which added to the difficulty and made you rely on your skill and reflexes to plough through the later levels.

The test of time:
Well we here in the land of Spectrum Games reckon this game has stood the test of time pretty well. It is still playable and challenging, and can hook you in on your first go. Even the way you put your name into the high score table is pretty cool. Overall a classic arcade game.

So don a pair of combats, get your 'cammo face' on and call Major General Franklin Kirby - cos all frikkin' hell is gonna break loose.

This fine retro shooter for the ZX Spectrum is definately one worth revisiting.

We recommend getting hold of the real hardware - but if not then download a ZX Spectrum emulator and download this game for the ZX Spectrum. Alternatively you could try and play it online.

Sorry for spamming the comments section tonight. I'm just in the mood it seems ...


Anyway, Commando. An absolute fantastic game on the Spectrum. In fact, I prefer the Spectrum version to the Arcade version mostly. It just seems better balanced to me (but that may perhaps be because I'm mental).

Assuming I am of sound mind, then the reason that the game stands the test of time for me is the smooth gameplay and the fairness of it all. Control is responsive, the game moved at a good clip, with smooth vertical scrolling and with full colour (to the best of the Speccy's ability). The bullets truly felt like a machine gun in a world where games usually held back bullets to three at a time at most. The grenade mechanic of holding the fire button was great and there was a good variety in the levels that were available (although they started to loop at level 5 or 6 I seem to recall).

I have played this game hundreds of time just trying to beat my score. It was actually my most played game (along with Chaos) on the Sam Coupe (via the SamTape spectrum emulator by Lerm Software). Such was the lack of quality software on the old Sam Coupe.

Ikari Warriors came after this and offered vehicles and more weapons but Commando offered full screen smooth action that was balanced and fair. Ikari Warriors was no Commando.

The Speccy version didn't have the cool Arcade soundtrack nor did it have the animation of the helicopter dropping the Commando off and the Commando waving goodbye but it had great gameplay in the bucketfuls. I'm not sure if this game accidently or purposely came out in the same year as the Arnold Schwarzenegger movie of the same name? As the game was Japanese in origin I'm inclined to believe that it was just a co-incidence.